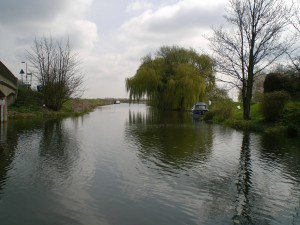 The river Lark at Prickwillow

The modern parish of Prickwillow was formed in 1878. The name refers to the long thin skewers, or ‘prickets’ of willow — used to make thatch — that grew in the surrounding marshy land. Prior to the nineteenth century, the River Great Ouse flowed east of Ely as far as Prickwillow, before rejoining the modern course of the Ouse at Littleport. In 1829-30, however, the river was diverted north from Ely, and the original channel ploughed and filled in. Today’s village lies on the site of the old riverbank, with evidence of the original course remaining in the name of the roads (e.g. Old Bank) and the meandering edges of the neighbouring fields.

Much of the Prickwillow area lies below sea level so, in order to ensure that the land remained arable, a series of steam pumping engines was installed at the base of the newly dug drain, linked to the River Lark. The first of these was the steam side-lever engine, installed in 1831. This was replaced in the 1880s by the steam beam engine, itself replaced in 1924 by the powerful Mirrlees, Bickerton and Day Diesel. With a weight of 25 tonnes and a nominal power output of 250bhp at 250rpm, this engine ran until the 1970s, when it was replaced with automatic electric pumps.

Prickwillow is the current office and workshop base for the Ely Group of Internal Drainage Boards who maintain the current electric pumping station in Prickwillow and surrounding watercourses.  The IDBs provide water level and flood risk management within their districts.

In the 1920s, it was reported that the constant draining of the land resulted in the peaty soil sinking by 2 inches (51 mm) every year. The local school buildings and St. Peter’s Church, built in 1862 and 1866 respectively, as well as many of the local houses, were built on piles to ensure stable foundations. Two steps were built up to the front door of the vicarage, but many more had to be added as the land gradually sank. In addition, owing to the high water table, church burials take place in the more elevated settlement of Ely.

The B1104 between Prickwillow and neighbouring Isleham is reputedly the most subsidence affected road in the country; so undulating is the 6.4-mile (10.3 km) drive that some have experienced bouts of motion sickness equal to that of shipping.